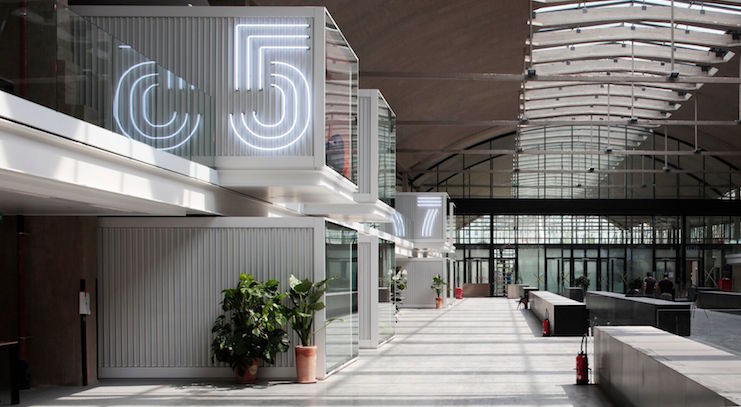 Station F, the world’s biggest startup campus, was inaugurated in June by its director Roxanne Varza, its founder Xavier Niel and the French President Emmanuel Macron. Since its opening on 7th July, Station F welcomes 1,000 startups from around the world and proposes more than 20 acceleration programs.

After 3 years of renovating the former train station in Paris, Station F finally opened its doors to the world of startups. Xavier Niel, founder of École 42 and Free, invested 280 million dollars to create this “French Silicon Valley”. A former Microsoft and TechCrunch talent, Roxanne Varza, is at its head. Also called the “good fairy of startups”, she is in charge of this 34,000 m2 campus that hosts more than 3,000 desks and many services with 24/7 access. Station F doesn’t aim at being profitable, its ambition is to help the French startup ecosystem expand.

With that in mind, the campus proposes 26 international programs in partnership with leading companies such as Facebook, Microsoft, Ubisoft or the French giant of e-commerce, Vente-Privée. Station F also has two acceleration programs of its own, called the Founders and the Fighters. Any ambitious startup at an early stage can apply to these programs and have access to full-time desks, resources and a unique community of the best entrepreneurs. So what’s the difference between the two programs? The Fighters Program is just like the Founders Program, but totally free because it is dedicated to entrepreneurs who “weren’t born in a privileged environment.”

Orosound is part of the Founders Program. Station F asked a jury of 100 entrepreneurs from 21 countries to select the best 200 startups of the 2,300 international applications it received. Orosound is now linked to Station F: it has access to a rich ecosystem to accelerate its development but will also supplement the ecosystem by sharing its experience with other entrepreneurs.